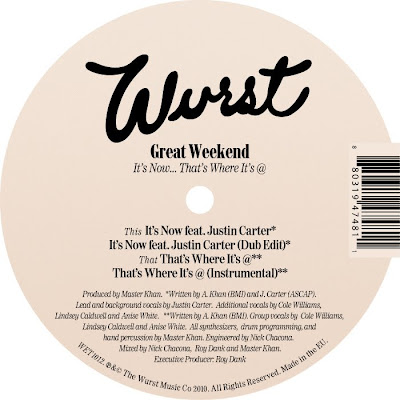 The gents behind Mister Saturday Night have been taking their moments off from throwing parties and DJing to spend some time in the studio. Justin, a longtime songwriter and singer (if you get close enough to the booth during his sets, you’ll probably hear him belting along with CeCe Peniston and Donny Hathaway), co-wrote and does lead and backing vocals on the title track of the new Great Weekend EP It’s Now.

Mister Harkin, who’s put out a solo edit record or two already, has recently been working in the studio with a North Carolinian named Steve Raney. The two of them tried their hands at remixing Neurotic Drum Band’s steamy Robotic Hypnotic Adventure, and well, their version is dope. Clearly we’re biased, but really. Dope.

Both records are out at this very moment on Wurst, our compadres in New York who are keeping it real and pressing up good music on VINYL! A Soundcloud stream of both jams are below. Enjoy.